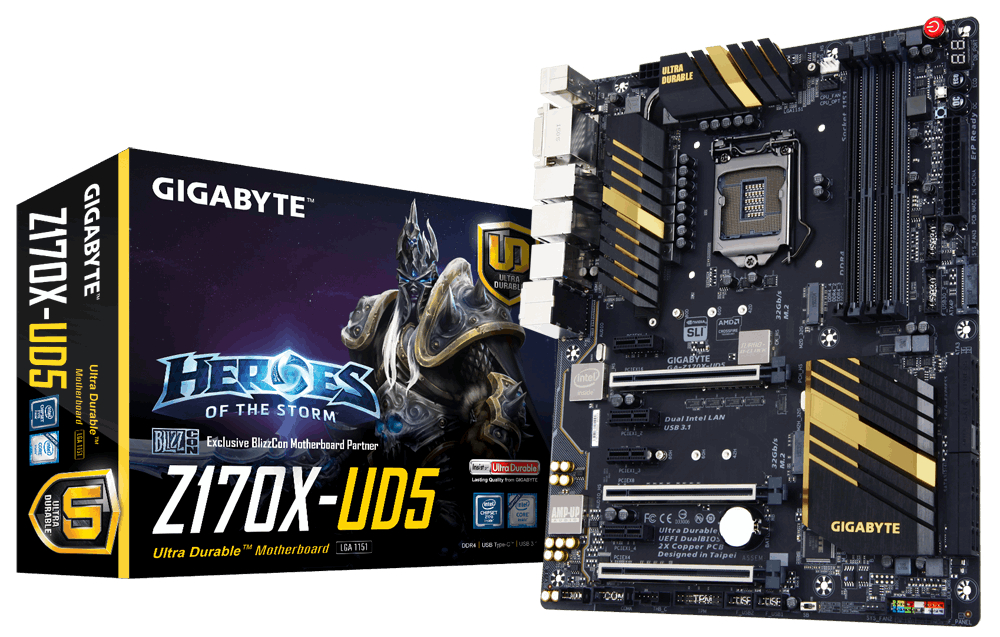 With the introduction of Intel’s new Z170 Chipset and Skylake processors, Gigabyte has announced Twelve (12) new Z170 motherboards to meet the demand of 6th generation Core processor users out there. The diversity of Gigabyte’s lineup, should fill the needs of everyone looking to upgrade to Z170 and Skylake.

One of the first of these Z170 motherboards to hit retail stores, will be the Gigabyte Z170X-UD5, from Gigabyte’s Ultra Durable Series of Motherboards. With motherboards from the Gaming Series to soon follow.

Plus, all of the standards, like Gigabyte’s patented UEFI DualBIOS, Amp-Up Audio, LED Trace Path Lighting, Dual Intel Gigabit Ethernet (with support for teaming) and Gigabyte App Center just to name a few.

Shortly, we’ll be getting a Gigabyte Z170X-UD5 motherboard into our grubby little hands. We will run it through all of it’s paces. Then we’ll let you know if we think upgrading to Z170 is worth your hard earned money.

Keep an eye out for our review of the Gigabyte Z170X-UD5 Motherboard here on The Mod Zoo.

One thought on “Gigabyte releases new Intel Z170 based Motherboards!”